If you’re thinking of buying a pair of new skis, you may find yourself wondering how long do skis last? After all, they’re not the cheapest pair of sticks you’ll ever buy, so it’s worth making sure they’ll last you a decent chunk of time.

While most skiers tend to replace their skis every eight or so years, peak performance usually starts to diminish after 100-125 full days of use. There are, however, a number of factors which can either shorten or extend this timescale. 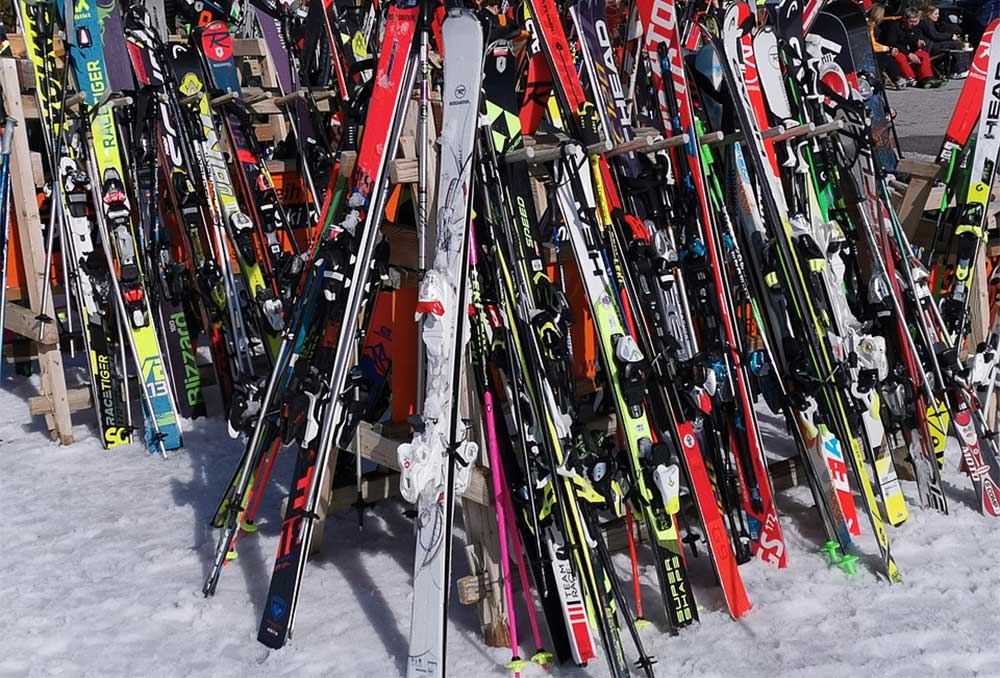 This guide will take an in-depth look at the lifespan of skis, including the main reasons why they wear out, the common signs of ageing to look out for, and the most effective methods for extending their lifespan.

Skis will age differently depending on the amount they’ve been used, how well they’ve been looked after (regular maintenance), the type of terrain they’re primarily used on, and the quality of their construction.

Worn graphics and small scratches are normal for all types of ski, but rust, dents, and bends can make your skis structurally unstable, difficult to control, and dangerous to ski on.

The main factors that cause wear and tear on skis are listed below:

With these factors in mind, we’ll now take a more detailed look at how some of them can influence the lifespan of skis.

Generally, the heavier you are or the more aggressive your style of skiing, the quicker your bases or edges will be worn. It’s likely that advanced and adventurous skiers will need to change their skis more often than recreational skiers.

Regular Use And Terrain

Regular use will eventually wear your skis out due to the abrasiveness of snow. If you typically ski on backcountry trails rather than groomed slopes, this will also wear your skis quicker. Trails with loose rocks and grit increase the likelihood of rust and structural issues, thus reducing your skis’ lifespan.

On the other hand, not using your skis often enough can also cause them to wear out. Only skiing a few times per year could result in the epoxy drying out faster. Moreover, if you’re not skiing frequently, there’s more of a chance that you’re ignoring basic maintenance.

The more your skis are exposed to ultraviolet (UV) rays, the more damage they’ll be susceptible to. This is why it’s essential to store them correctly after a day on the slopes.

Considerations such as correct storage and regular maintenance will be discussed in-depth a little later in this guide.

Signs Of A Worn Ski

While many signs of wear such as faded scratched graphics are only cosmetic, there are a number of different areas where a well-worn ski can exhibit signs of more serious damage. Listed below are some of the most common ways in which skis are worn out by skiers.

In addition to some of the more severe signs of wear, there are a couple of other reasons why many skiers often want to replace their skis.

Ski technology moves at an increasingly fast pace. So, what was top of the tree five years ago may be so outdated that it would be incredibly difficult finding a place that could still perform maintenance and repairs on your skis.

Moreover, modern skis are generally more lightweight, which helps to reduce fatigue. They’re also equipped with the latest technology to reduce vibration at speed, providing you with a smoother and safer ride over bumps or crud snow.

Ultimately, if you feel that your current skis are no longer giving you the performance boost you need, and therefore hindering your progression, it may be time to consider upgrading to a new pair.

If you’re planning to be adventurous and diversify your skiing, then this is as good a reason as any to replace your skis. For example, some skiers who take an interest in slalom may want a new pair of skis or a second specialist ski to take them off groomed slopes.

New shapes of ski often have a tightened turning radius and enhanced rocker profiles which enable you to carve much easier while also handling mounds of powder.

Over the last few years, the All-Mountain Wide Skis have proved incredibly popular due to the fact that they perform equally well on both fresh powder and hard-packed snow.

If you’re in need of a new pair of skis but don’t want to pay the full price, you can save a considerable amount of money by buying skis at the end of ski season (either spring or summer).

More often than not, you’ll be able to find excellent discounts such as 20-40% off skis brand new from the previous year. Just be mindful that if there’s a particular model you have your eye on, it may have sold out by the time the end of season sales take place. This is because many ski manufacturers are getting increasingly better at forecasting their sales and inventory levels.

How To Maintain Skis 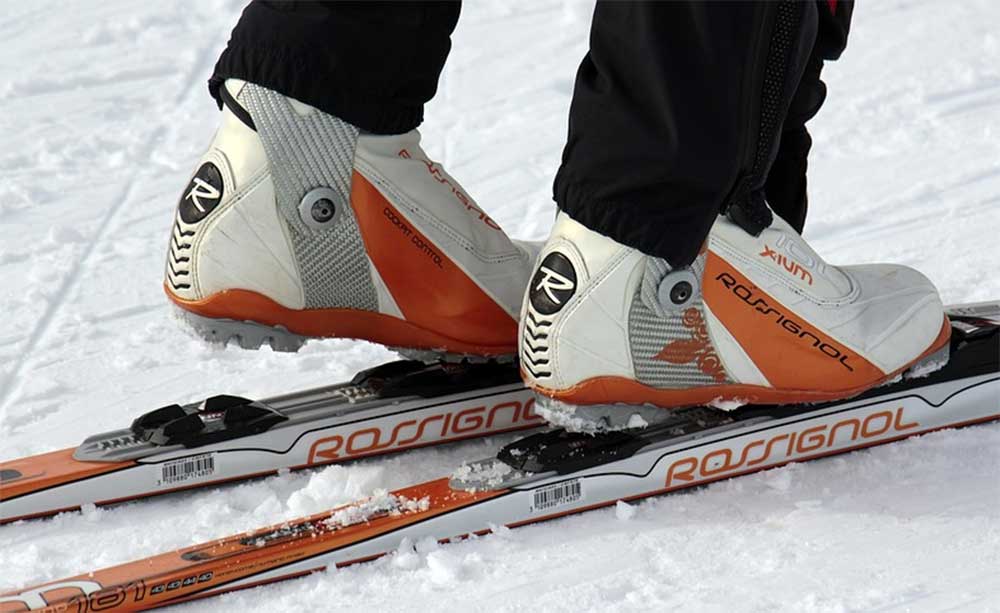 While skis have a natural lifespan, with wear and tear inevitable, there are a few things you can do to prolong their lifespan and eke out that little bit extra in terms of performance. Listed below are four of the most effective methods for achieving this.

Regular waxing will reduce the friction between the snow and your skis. It’s recommended to wax them every 5-10 uses or at the start and end of a short season.

It can also help to reduce the amount of water that sticks to them, while the wax can act as a handy protective layer between the snow’s harshness and the bases of your skis.

Keeping your skis stored upright with the tips pointing toward the ceiling is important. They should be kept inside, preferably in a shaded, dry and ventilated room.

Whether it’s over the off-season or just between sessions, storing your skis upright will prevent warping and damage to the tips. Furthermore, it’ll also help to maintain your skis’ camber.

Ideally, however, you’ll want to get a soft dry towel and thoroughly dry your skis each time you use them. This will prevent water from causing premature damage.

Getting the edges of your skis sharpened regularly is essential if you’re looking to extend their lifespan. Failure to do so will leave you with blunt edges and an increasingly difficult task of controlling your skis on the slope.

While you can sharpen the edges of your skis yourself, it’s best to leave it to a professional as they’ll have the proper tools to do it as efficiently as possible. Therefore, taking them into a shop is a good idea.

Once skis reach 5-10 years old they’re still considered modern but may not provide the best performance. It’s likely that you’ll need to work harder to get the same level of performance out of them as you could when they were just a couple of years old.

What’s the difference between fat and skinny skis?

In general, fat skis are better suited for powder while skinny skis are ideal for the groomers. If, however, you’re looking for an all-mountain ski that can handle a mix of conditions, a ski in the 96-103 mm range is recommended.

It’s worth noting that skinner skis are easier to get an edge on if you’re skiing in hard-packed, icier conditions. Therefore, a ski in the range of 88-93 mm is ideal for these conditions.

On the other hand, if you typically ski in deeper snow, something a little wider around the 105-113 mm mark may be more beneficial.

How athletic do you need to be to ski?

Skiing is an athletic sport, so the fitter and stronger your muscles are, the easier you’ll generally find it. You’ll often have to use muscles that you don’t use for anything else. While having a healthy and effective cardiovascular system is also important, you can ski without being in excellent shape.

Buying the right pair of skis and taking good care of them will provide you with plenty of years of good use. While it’s normal for their performance to get progressively worse after 100 days of use, there are plenty of things you can do to extend the lifespan of your skis.

If, however, they’re significantly worn, and their performance is holding you back from maximizing your time out on the slopes, it may be worth looking to upgrade to a new pair. Just be mindful that skis aren’t generally cheap, so buying a pair during the off-season is often the way to go.